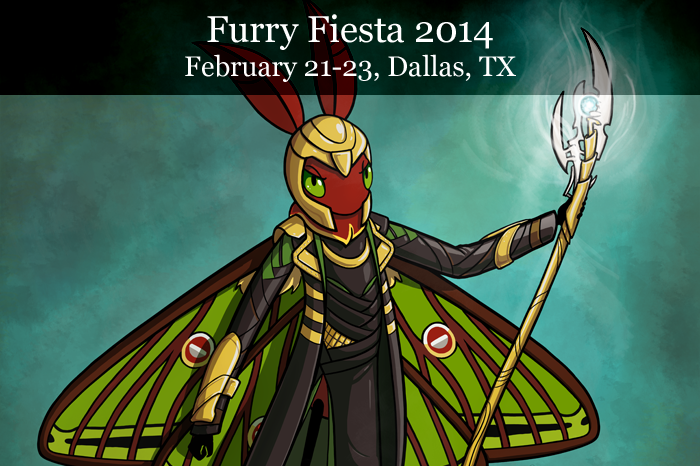 I just got back from a weekend in Dallas, TX at Texas Furry Fiesta! This one’s a smaller convention attended by artists, musicians, costumers, and other creative attendees who love animal characters. Going to Furry Fiesta was a late-game decision for me, so I had a little space in the art show but no active sales presence. While I don’t plan to add this convention to my sales circuit in the next year or two, it was a lot of fun, and I wouldn’t mind going again sometime.

As always with “furry” conventions, I and many other attendees are often known by fan names, so I’ll try to keep things clear in this report!

A friend invited me to stay this convention in her nearby apartment rather than a hotel room, so we got settled in until it was time to head over. Registration differed from other cons I’ve done: you had to have a signed agreement on hand, and you could choose your badge art from four possibilities along the theme, “Heroes and Villains.” Thanks to our 3DSes and Streetpass, we quickly found an artist friend of mine who goes by “Floppybelly” (she makes cute pipe cleaner sculptures)!

There was a little confusion about panel locations during art show setup, but it didn’t take long for me to get situated. I only had half a panel this time because I’d been too busy after FC to do much new work besides commissions. 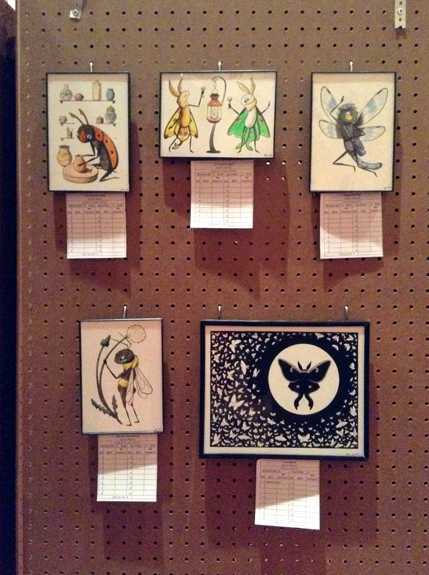 My half-panel in the art show.

Artist’s Alley and the Dealer’s Den were available to browse shortly before Opening Ceremonies, so we had a quick look around. I picked up a CD from Fox Amoore, who remembered me from MFF! Then my friends and I grabbed seats in the main ballroom. What followed was funny, if a bit long-winded, and included the chairman getting a pie in the face. I checked the Art Show again to see what other artists had up and saw a lot of neat work, though the room could’ve used stronger lighting. I also commissioned a sketch in the tiny Artist’s Alley and dropped off a badge with a client. 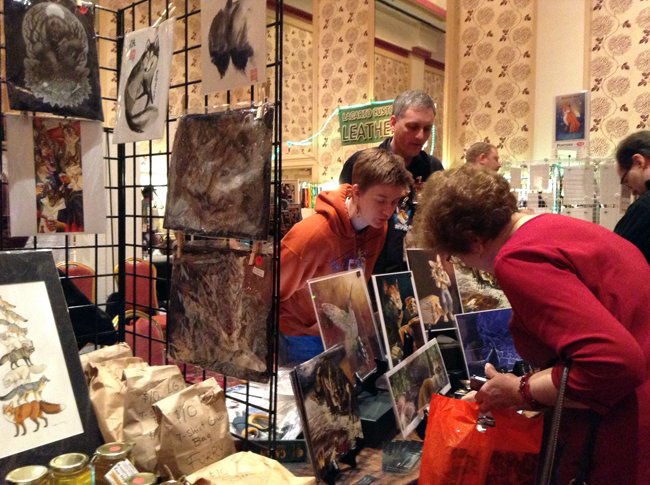 Action in the Dealer’s Den.

Later, I tagged along with friends to a panel about faux fur – where to get it, how to sew it, and so on – and took some notes for a few creative projects I have planned. We wandered down to the basement, which used to be nightclub, and watched karaoke. Of course, everyone there joined in for “Bohemian Rhapsody.” The real highlight of the night, though, was the Heroes & Villains rock concert with Fox Amoore. Even with a few quirks in the presentation, the performers’ talent and enthusiasm made for a strong and entertaining evening I doubt I’ll forget. My only regret is not bringing my good camera to this con; I have nothing but grainy phone pictures which did poorly with the stage lighting. Lesson learned! 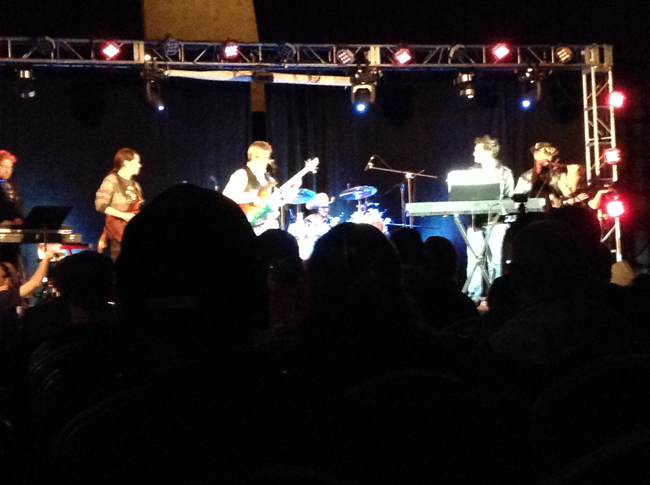 After a late dinner, I won at Settlers of Catan even though I’d only just learned to play it the night before.

I started the morning strong by attending a panel called “Total Utter Piñata Destruction,” which was what it says on the tin. By the time it was my turn, someone had broken the bat, but I still managed to use it to make a hole the size of a person’s head in a new piñata. Then I did more browsing, caught up with friends, checked on my pieces in the art show, and went out to lunch. At 1pm, I listened to half of the Blotch artist duo talk about their process for making graphic novels. I found most of the information presented a little basic for my needs but still came out of it with some useful notes – not to mention I got to see some of their originals for Nordguard up close and personal!

Most of the con then shut down to either join in or attend the fursuit parade. A lot of interesting and creative costumes walked by, but my favorite was a rosy maple moth! I managed to snag the person afterward for a decent picture: 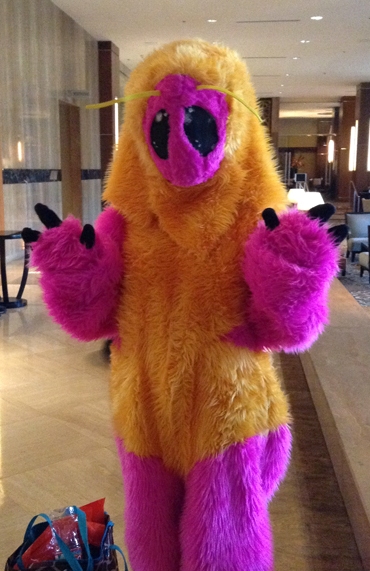 They had adorable little wings in the back, too.

Fox Amoore held a panel about recording his latest album at Abbey Road. From his telling of it, the experience was simultaneously intimidating and fulfilling. I had gone in with the intention of livedrawing the panel, but it didn’t really end up with the tone that works best for my livedraws, so afterward I worked on a little something as a surprise. Later in the evening, I attended a two-hour research focus group for artists in the fandom. A lot of topics were discussed among the attendees that should make for some interesting results when our researchers are done.

I went around the Dealer’s Room again and took more pictures of costumers. Then it was time for Fox Amoore’s charity concert! Fox played some of his own past and upcoming pieces as well as some jazz numbers with Amadhia on vocals. I managed to snag a minute of Fox’s time as the room cleared to hand off the ink card I’d done. Let’s just say he seemed to like it. 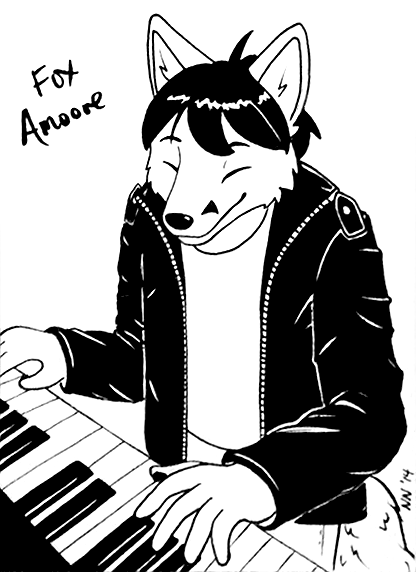 Art card done as a gift for Fox Amoore.

Another big highlight of Sunday was the fursuit dance competition. One of two opening performances involved Telephone (a costumer popular for her unparalleled skill in being ridiculously adorable) dancing with a little girl. I plan to show this video to anyone who might wonder why I associate with furry fandom:

Before long, the time came for Closing Ceremonies. A lot of money had been raised for the charity, The Center for Animal Research and Education (CARE), including some last-minute funds gathered from the crowd. More faces met high-velocity pies, and the A/V staff teased the rest of the people on stage by putting captions over the video feeds that were visible only to the audience. Furry Fiesta definitely went out with a bang.

We returned to my friend’s apartment for dinner and to pack. I flew out the next day, but not before being hassled by her cats and taking a few more pictures by which to remember everything. I left two pieces lighter than I came (and some part lighter in heart, too). Anthrocon is next unless plans change – Pittsburgh had better be ready for bugs!