PB Art Reviews: Year of the God-Fox (Books One and Two) 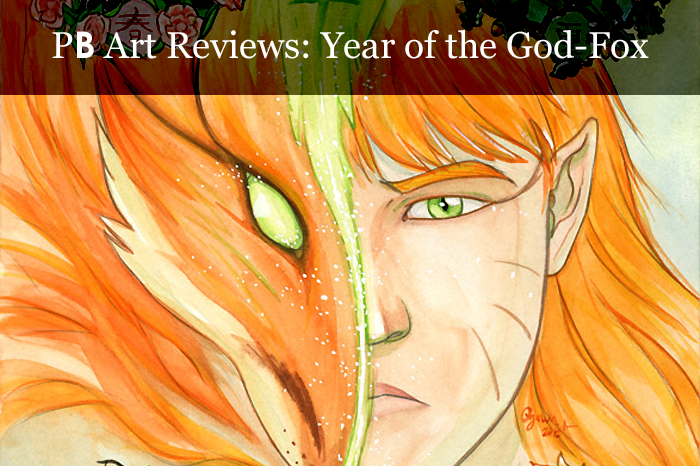 I’m a sucker for stories where nonhuman characters struggle to decipher and navigate a human-centric world. Whether they strive to be like us or undermine us, the perspective they offer on our own nature through their difference can be refreshing and thought-provoking, and their difficulties managing our social and cultural constructs echo a frustration with the norms of our world that many of us feel from time to time. Goldeen Ogawa’s Year of the God-Fox effectively uses the perspective of a nonhuman character to tell a fun yet thoughtful tale about the complexities of the human experience and the value of life. This review covers Books One and Two of the story, as the rest has not yet been released.

The tale begins as Saimaru, a kitsuné or “God-Fox,” is sentenced to live for a year as a human as punishment for attacking a village. Saimaru considers his kind far superior to humans, and his utter disdain for “lower” life makes the transition to the human world awkward and humiliating. Still, it’s not long before Saimaru meets other characters who both help him and drag him half-grumbling along into adventures. He works picking fruit, eats raw fish, barely tolerates having his hair done, and questions everything he knows. 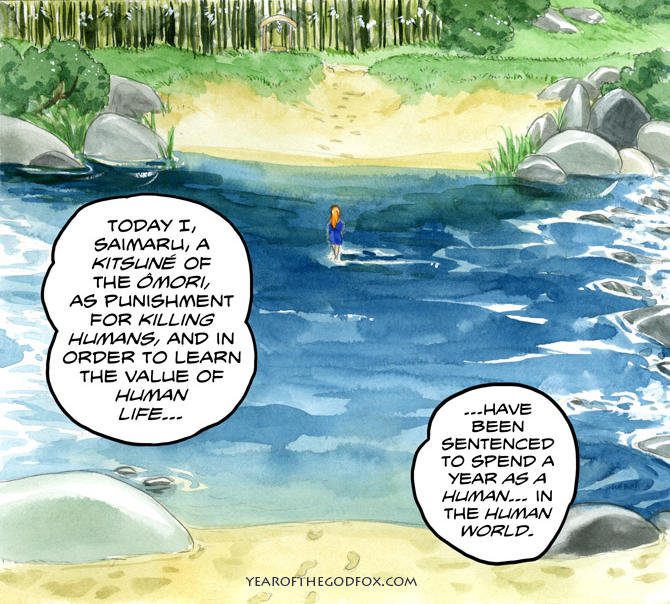 Author-artist Goldeen Ogawa has a knack for imbuing her characters and worlds with life and personality through a variety of quirks, flaws, and nuances rather than falling back on common stereotypes. Even the cruelest of her characters have dimension and believable motives. Ogawa explains on the comic’s About page that Year of the God-Fox is her answer to stories with supernatural characters in which humans are “portrayed as boring and stupid.” She aims to show “one of these proud non-humans” confronting “the intricacies and quiet strengths of humanity,” and so far she has done just that. Just before Saimaru is turned human, we get a first of many glances of human nature in the villagers Saimaru attacks, and Saimaru’s behavior and beliefs throughout the story so far are repeatedly challenged by humans who prove to be something more than he expected. 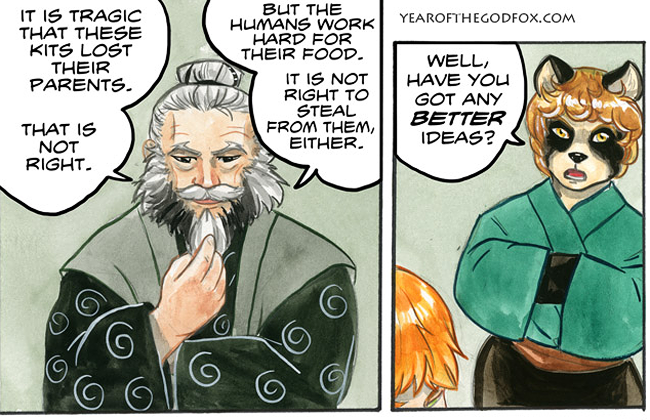 There is a the powerful contrast between Saimaru’s attitude toward other life-forms and the attitudes of others he meets throughout Year of the God-Fox. He compares humans to animals “not worthy of our respect” several times, and in one scene he suggests that a God-Fox killing humans is “different” from humans killing each other, “rather like a human would think less of killing a dog.” Saimaru is also upset by Pomoko, a tanuki, cooking the fish he eats because she is “an inferior species.” But the other creatures Saimaru meets don’t think as he does. They’re not perfect, but they are often good-hearted. The people of the Village Protected By Foxes honor their agreement seemingly for generations, and Meibei’s cousin values the truth highly enough to put himself at risk so she may escape danger. Meibei’s simple response to Saimaru’s comment about killing a dog speaks volumes about how differently they perceive the value of life.

The art in Year of the God-Fox varies from rich natural scenes to simpler backgrounds that keep the focus on a single person or event. The characters are varied and highly expressive. Manga influences are present, yet Ogawa’s style stands on its own. I particularly noticed and enjoyed the way art in some panels seems to echo others in a thematic manner the same way the dialogue does. When Meibei recounts her mother’s death, Ogawa depicts her and her dragon-owl companion on opposite ends of a wide panel with emptiness between, implying a sense of loss. Another final goodbye later in the story is reminiscent of that scene, but this time, she has the closure of a last embrace and her new friends nearby to support her. 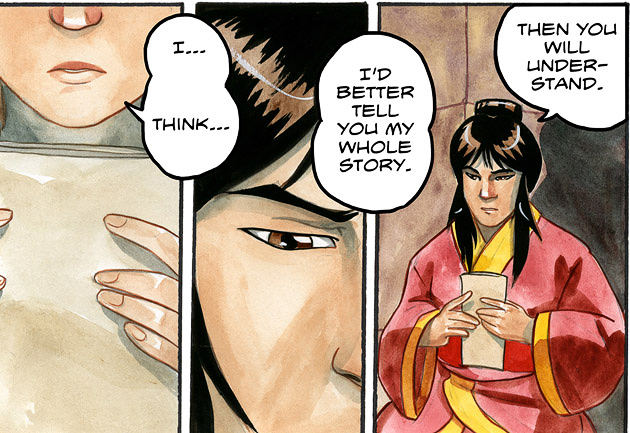 There’s a good deal more going on in Year of the God-Fox, but I don’t want to give it all away, and much is yet to be revealed. I’ve enjoyed Ogawa’s comics before and feel confident the entirety of Year of the God-Fox will be just as worthwhile a read. Visitors to the webcomic’s site will find the story organized into four books titled after the seasons, each containing several chapters; preview pages and bonus material are available for each chapter, and PDFs of the books are planned for later release. Books One (Summer) and Two (Autumn) are up on the site at the time of this review, but the entire comic is slated to be available by early summer 2014.

“Year of the God-Fox” can be read or previewed at YearoftheGodFox.com. More information about the author and her other works is available on her blog or at the Heliopause Productions site.