On The Memory of Moths: The Little Things 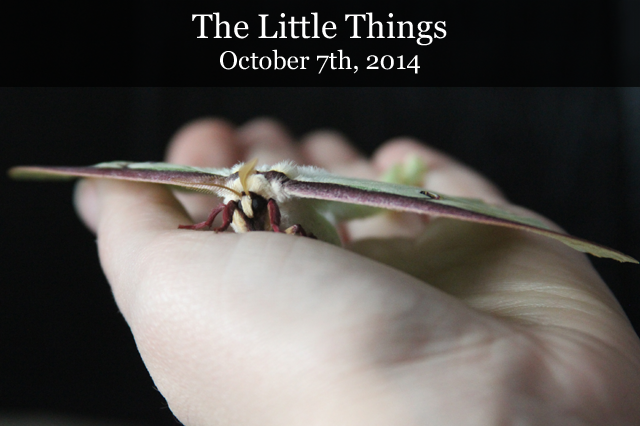 I hardly need to say I ceased to write about the moths after Day 5 this past May. It’s not that I had nothing to say; I had so much but was so busy with summer work that it became nearly impossible to juggle caring for the moths and working and writing. One of those had to go. Since then, the trio of moths and the events after they passed on have given me much to think about.

Cedric, the first, made a big impression on me – he was a maniac. He lost no opportunity to fly and flap around, and so his life was spent in one short blaze. On the sixth morning it was evident that he had become much thinner and lost the strength to fly. His wings were tattered. He’d lost the front four of his “toes” and tapped his feet against the mesh basket in vain, unable to understand why he couldn’t grip it anymore. As much as I wanted to spend more time with Cedric, it was clear he was miserable. I made the difficult decision to put him to sleep. 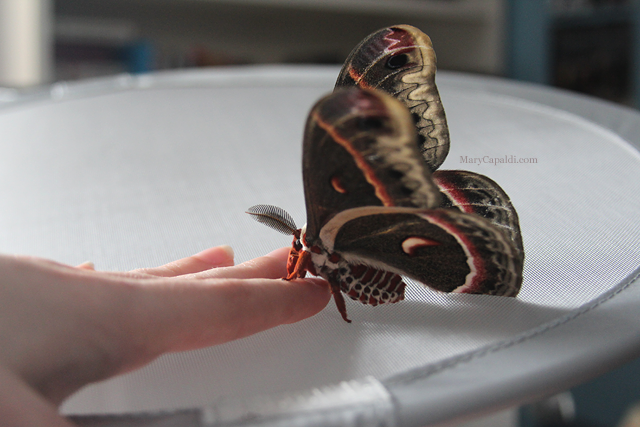 Terry continued to do well for most of her total of seven days and proved extensively tolerant of my desire to take photos of her and show her off to friends. She was like an angel in insect form – patient, airy, beautiful; perfect even with the odd little notch next to the eye on her upper right wing. Her flights were somehow graceful despite the typical silkmoth clumsiness. She sat on my desk as I worked and supervised me creating “Moon Over Water.” 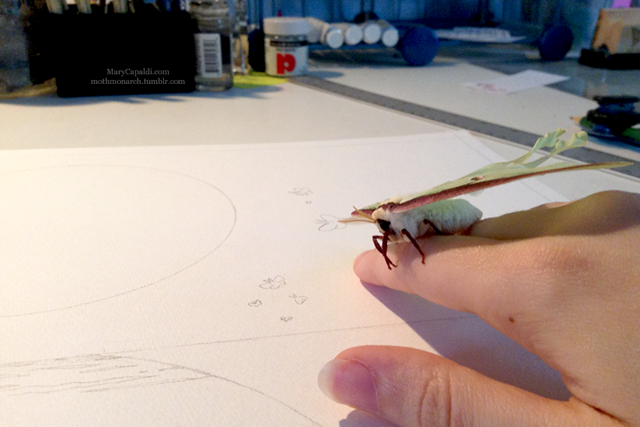 Terry taking a peek at the early sketch for “Moon Over Water.” 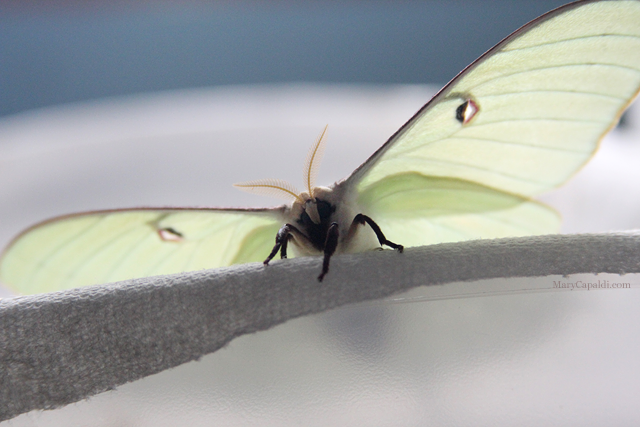 Her wings seemed to glow when the light was behind her.

Unfortunately, Terry was not able to attract a mate thanks to several days of poor weather. She laid her unfertilized eggs and soon became as thin as Cedric on his last day. It was time for her to go, too.

The last moth, another cecropia, did not eclose until a week after Terry’s death. He made an instant impression on me by refusing to sit still while his wings were filling out. They dried perfectly despite his wanderlust, but he continued to surprise me with odd behaviors neither of the moths before him had displayed. I’d intended to name him “Darius,” but “Fritz” suited him much better.

Freshly eclosed and already getting up to mischief.

At one point, he went for a little flight and landed in a dusty corner. I rescued him, and he seemed calm for a moment, but then this happened. That video got a lot of attention on Tumblr, good and bad, for months after Fritz passed away. His 15 minutes of fame probably put him up there with the most famous individual moths ever to live on this earth. If there is nothing after this life for little bugs, he has at least lived on in many memories.

I suppose the average person wouldn’t think it possible to bond with insects in a matter of days, but I did miss them when they were gone. Each left tiny little moth footprints on my life. I have had many thoughts about what it is to love something unconditionally that cannot love you back or find meaning in your presence in any way a human person knows how to detect. Perhaps I will be forever unpacking this experience – turning it over and over to see all the facets as I have for my father’s death in the last nine months. I don’t know. But I can say it was worth doing, and I intend to do it again.

In September, my sister was weeding her tomato plants and found a fat tobacco hornworm caterpillar munching away on the branches like no tomorrow. She intended to kill him, but I rescued the little guy. He gobbled up leaves I carefully pruned from the plant for days until he was gorged and ready to pupate. Though fellow mothkeepers recommended I provide shredded paper towels for him to burrow into (as his species does), he refused to settle down until I offered a thick layer of real dirt in a bin. Eventually, when I was sure enough time had passed, I dug up the pupa. 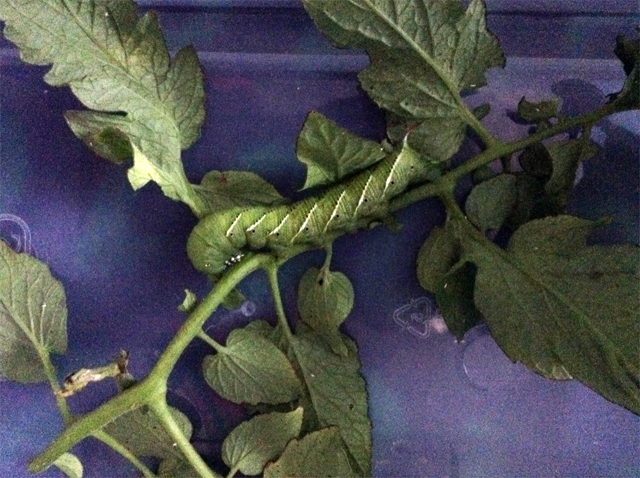 The little hornworm having breakfast. 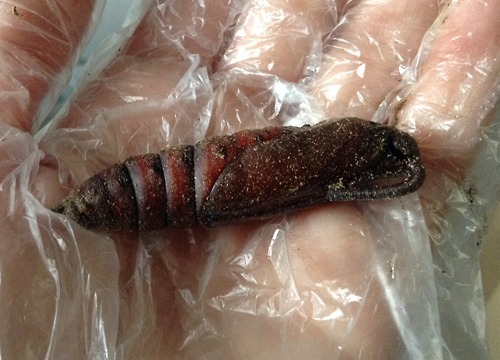 He’s surprisingly large as a pupa!

Last night, I checked on the pupa and found a sad sight. It had turned black, indicating the hornworm had died, and there was evidence a tachinid fly had parasitized him as a caterpillar. This can happen with wild-caught moth larvae. Unlike some other parasites, these flies create no outward sign anything is wrong until too late. Nothing I could’ve done would’ve changed the hornworm’s fate. Even so, I am sorry to lose him far too soon.

A line from a famous poem has been ringing in my head along with the memories of my moths, and I have written it nearly every place I’ve memorialized them in word or image. “Nothing gold can stay.” – Robert Frost. I have seen little in my life so far as beautiful and perfect as these creatures were to me, and yet they faded so quickly, as it seems all the best things cannot help but do. They were innocent – they were gold – so of course, they could not stay.

I am obtaining my cocoons for 2015 from multiple sources and so far have lined up one cecropia and one of a new species, the imperial moth. I hope to get multiple lunas as well. We’ll see! 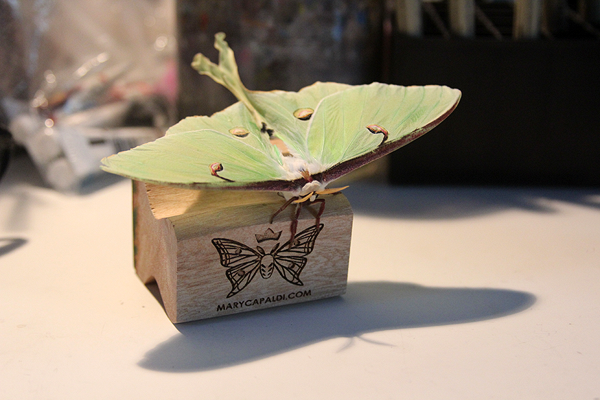