On Pinning and Preserving Bugs

Posted by Mary in Classes and Workshops, Main Blog 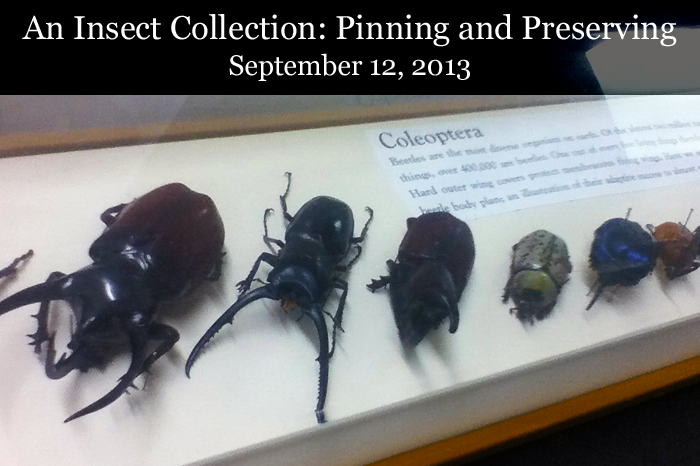 This week, I took an adult class at the Academy of Natural Sciences on insect pinning and preserving. Since I draw and paint bugs often, both realistically and as cartoons, I thought it’d be wise to learn how to collect specimens as references – sometimes photos don’t provide me the information I need for my work. The class proved to be a rewarding experience, as I got to see some of the Academy’s research collection, learn about how to catch, preserve, and pin insects, and pin four bugs of my own. I even met a couple of artists while I was at it.

After introducing themselves, Greg Cowper (Entomology Curatorial Assistant) and Karen Verderame (Live Invertebrate Specialist) opened the class with a discussion of collection methods used by entomologists – everything from aerial nets to pitfall and carrion traps. Some were active or passive, some used or didn’t use lights, but the goal of every technique was to collect intact insects for preservation and study. Greg and Karen used a Powerpoint of images to illustrate each method as it was used in the field and show results.

Next, we went back into the Academy’s collection, which is housed in a large, cooled room with compact rolling shelving units. Greg talked a little about the history of the collection and what has historically been done to help preserve it (today, the collection is frozen in parts on rotation to kill specimen-eating beetles). Then, he started taking out boxes to show us. I didn’t have my good camera on hand, but I wasn’t going to go without photos: 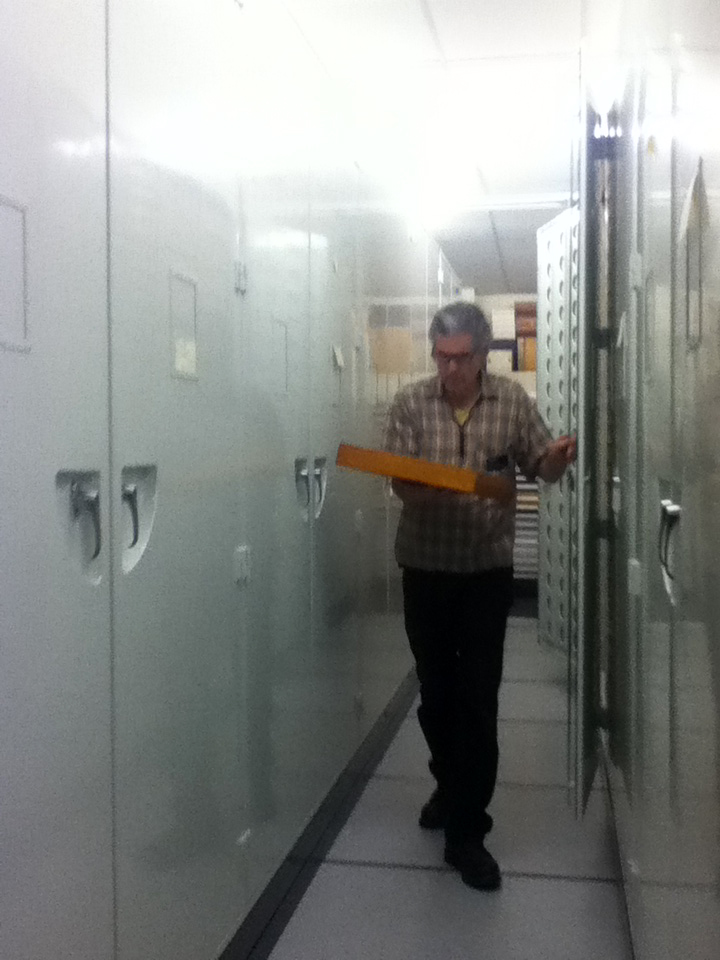 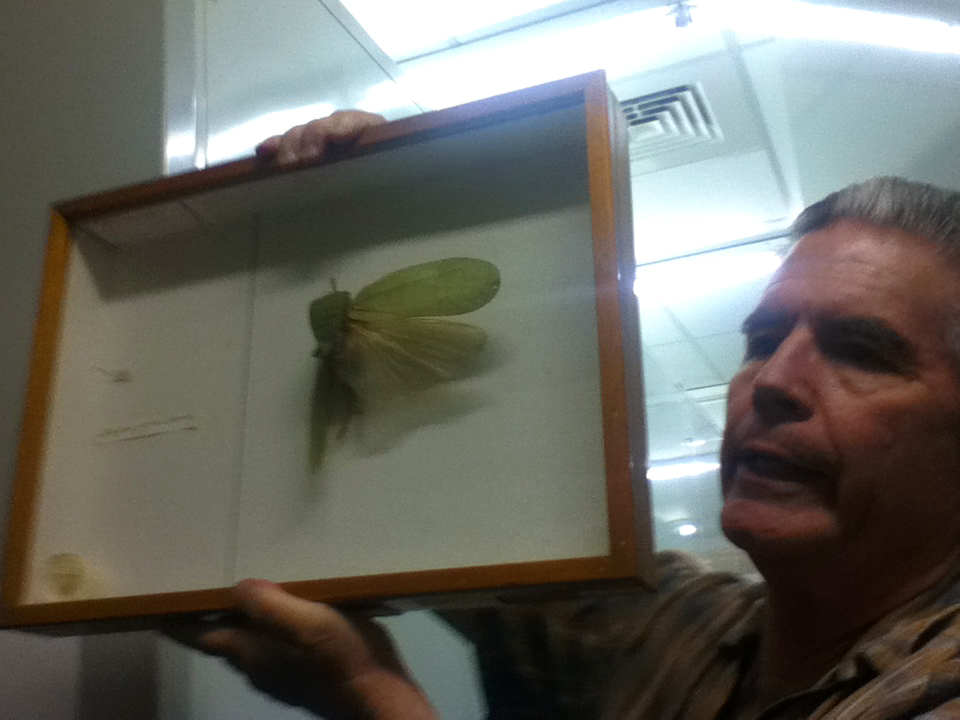 Left: Greg brings a box out of storage.
Right: Greg holds up a preserved Katydid with one wing extended.

We saw bees, beetles, grasshoppers, a katydid, and butterflies. Greg talked about how some of the Academy’s collection had been acquired from a repossessed storage unit and how the boxed specimens fit perfectly in the slots of a donut cart for freezing. Lots of questions were asked and answered! 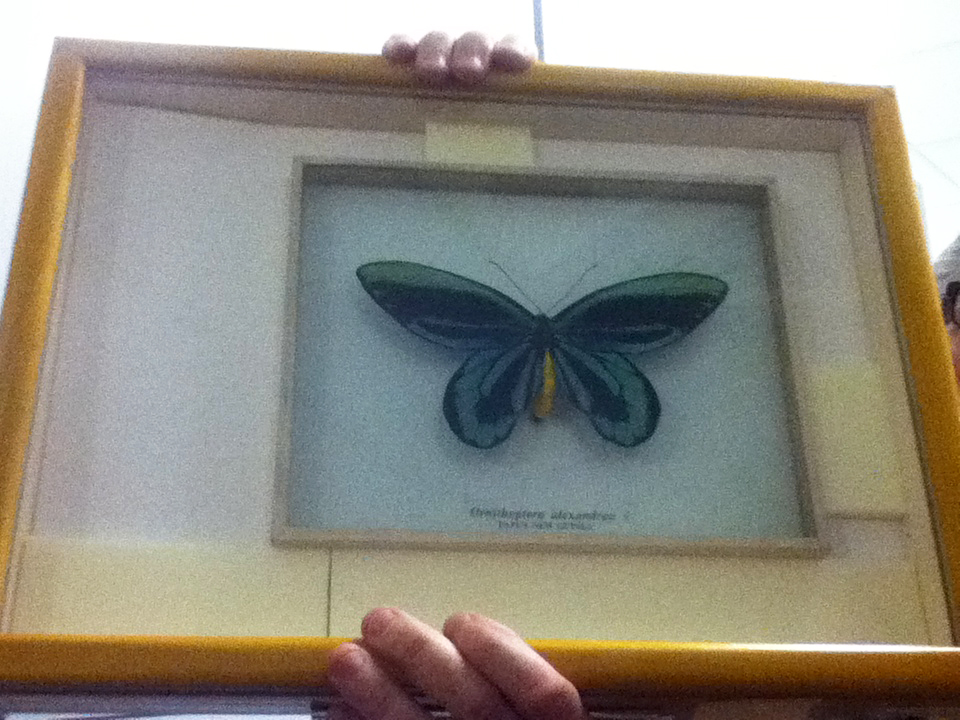 A male birdwing butterfly – the largest butterfly species in the world. 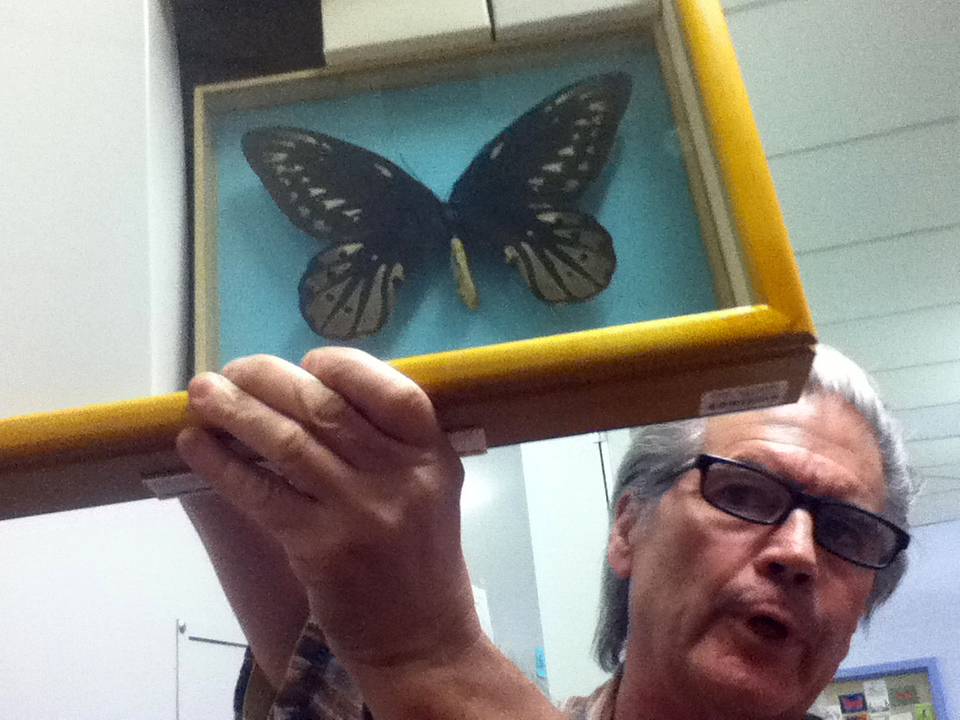 Greg explains that the birdwing butterfly is sexually dimorphic – this female is even larger than the male.

Our group probably could’ve spent all night in the collections, but eventually, we returned to the classroom. Before resuming the Powerpoint, we all talked about why we were attending. There were at least two artists besides me in the room and plenty of hobbyists with memories of collecting bugs as kids. Greg and Karen then discussed where to get supplies for pinning and the proper methods for pinning different kinds of bugs. Each attendee was given three beetles to pin, and off we went! Some people chose to keep the insects’ legs tucked under, which is apparently preferable for scientific preservation; others, like myself, spread the legs slightly for a more lifelike or artistic appearance. 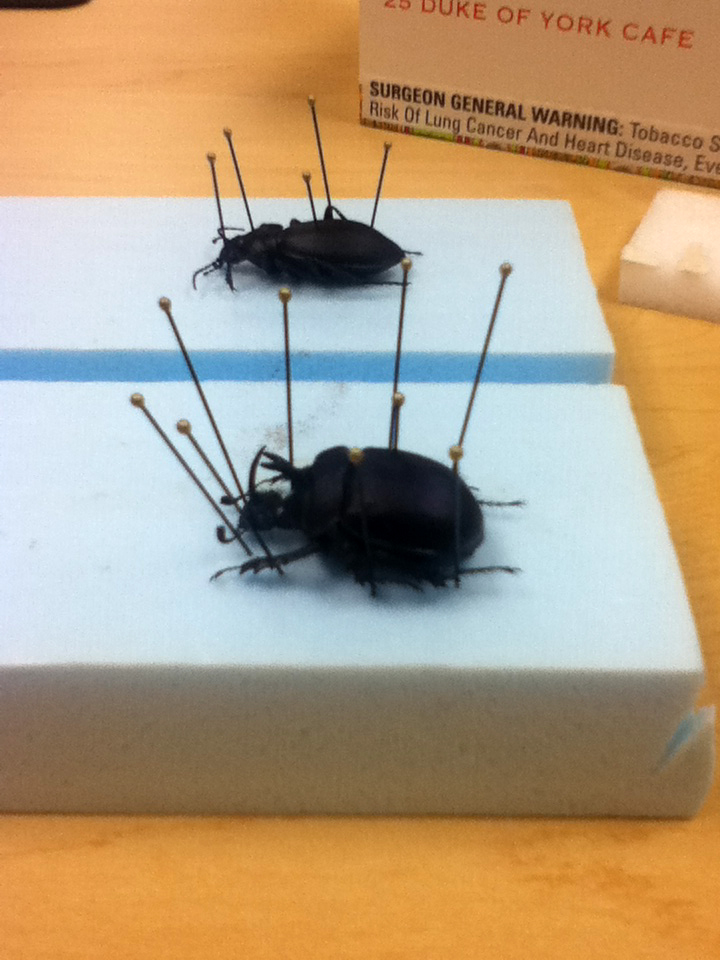 Two of the beetles I pinned.

Greg came around to check our work and help people as needed. Everyone did very well, especially for their first few tries! Cigar boxes were passed out to take our beetles home in, and then Greg gave each attendee a butterfly to pin while Karen circled the room with a live katydid walking up her arms. I was given a beautiful wooden cigar box but traded with another woman who said mine “spoke to her.” 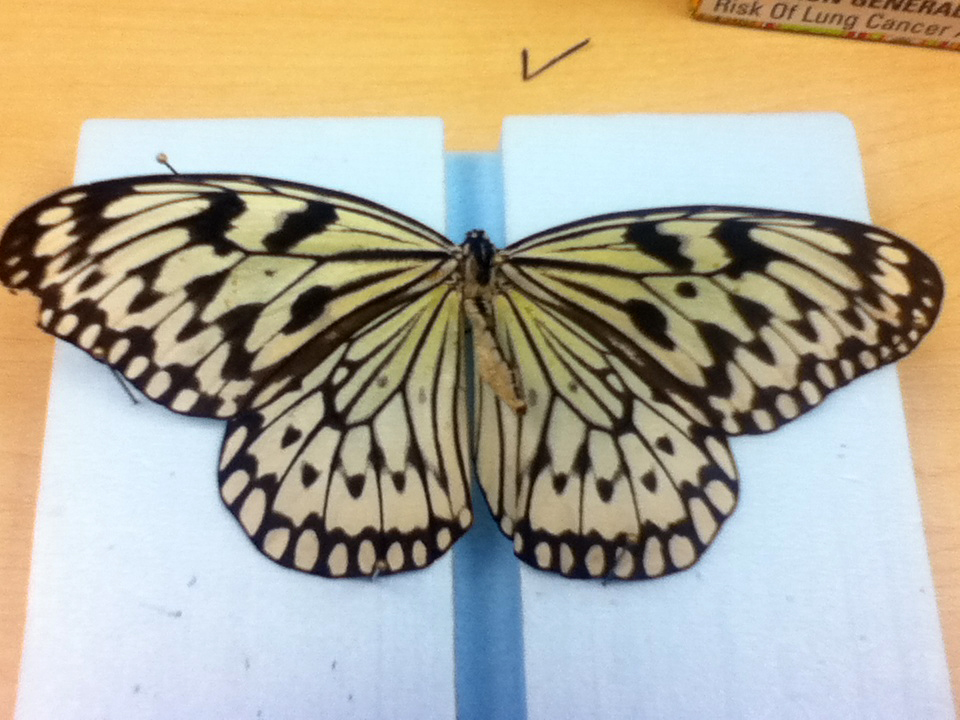 We spread and flattened the butterflies’ wings with glassine strips and pins. I had to use an extra piece of glassine to get my butterfly’s abdomen to stay straight and flat. While we weren’t able to take our butterflies home then and there – they’re drying at the Academy for later retrieval – we did take our beetles when the class ended. Before leaving, I talked to the other artists in the class and exchanged contact information. I’ll be interested to see whether what we learned shows up at all in either of their upcoming work!

Overall, the class was a fun and valuable learning experience, and I’d recommend it or one like it to anyone interested in insects. I got to see some of the oldest collection of bugs in this hemisphere, take notes from professionals on how to catch and preserve insects, and get guidance on exactly how to handle and pin delicate specimens. It wasn’t nearly as difficult as I expected, and being surrounded by other people as fascinated by bugs as me for a few hours was refreshing. I’d definitely like to do more activities like this in the future!